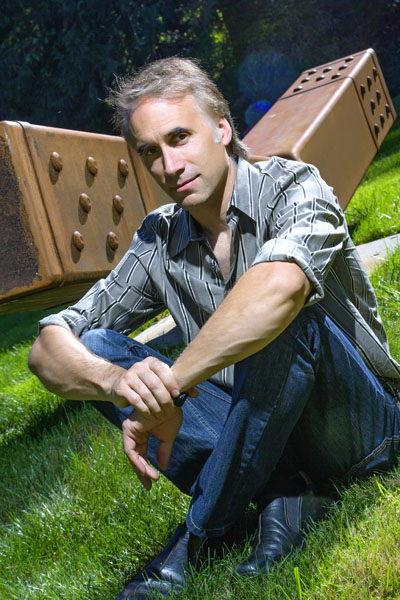 Devin Laurence Field is unique among contemporary large-scale metal sculptors because of the level of articulation he achieves in directly fabricated steel.  Not sculpted in clay then cast in metal, or hammered in thin sheet onto a sculpted pattern, his work is cut, forged, pressed, welded, ground and polished using thick plate steels.  Predominantly commissioned for public sites, these sculptures are complex yet graceful representations of ideas and concepts developed around a particular place, event or setting.  Each sculpture is unique, usually site specific and always poignant in its message.  The art of Devin Laurence Field brings together universal and archetypal symbolism, the history of a given site or culture, and natural forms to communicate ideas about the evolution of the complex relationship between people, the built environment and the natural world. While growing up in New Zealand, Devin traveled throughout the South Pacific, Australasia, Europe and the Americas.  A fifth generation artist, Devin studied art in New Zealand, England, France, Japan and the United States, earning three degrees in the Arts including a Master of Fine Art in Sculpture.

Honored by his peers with such awards as the Helen Foster Barnett Award from the National Academy of Design in New York, the Evelyn and Peter Haller Award from the Society of Animal Artists, and the global design award for the 2008 Beijing Olympic Games, Devin Laurence Field has built permanent commissioned sculptures for institutions, cities, state and national governments and exhibited in museums around the world.

“Devin Laurence Field is a sculptor who works metal with great profundity, reaching a singular level of mastery in monumental works as well as in small format. He achieves this mastery by combining his unique structural strategy with a particular manner of reinterpreting the world, mixing technique with emotions to obtain an exceedingly universal conception. An unequaled fabricator, he creates from direct hard metal, representations which could easily be mistaken for cast work, due to his execution, knowledge of the material, and a technical quality that is extraordinary. One of the things that identifies us most is the search for the monumental, for he too has spent a good part of his life and artistic pursuits creating monumental urban sculptures, integrating ancient precepts with a spirit of renovation and modern investigation.” -Sebastian, internationally renowned Mexican sculptor of monumental public art. Designer of the 147-foot tall “Puerta de Chihuahua, Mexico, the 65-foot tall “Tsuru” in Japan and over 50 other major works around the world.

“Mr. Field’s ambition as a sculptor to produce the work that he does, is directly challenging the calling of the modern sculptor.  His sensitivity and questioning conscience that is evident in his pieces must be a product of the struggle between his affection for nature and the harsh stimulation of the society at large.  Mr. Field’s values and intuitions are perhaps instilled by an identification with the nature of the Earth and as the ancient peoples did, he includes in nature, all things living.”-Hiroshi Minamizawa, author of numerous books on metal sculpture and ornament including  “Monuments and Culture”,  “The World of Decorative and Architectural Wrought Iron”, and  “The Shape of Civilization”.  He is also the president of Yoshiyo Kobo Co Ltd, one of Japan’s leading producers of ornamental metal works.